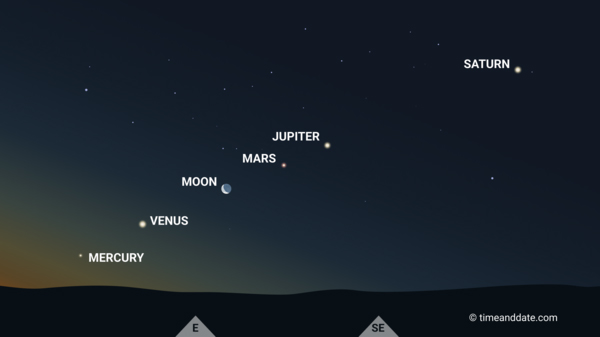 Today on my morning walk I saw four of our five planetary neighbors that are currently hanging in the eastern sky like diamonds on a string – Saturn, Jupiter, Mars, and Venus (plus the waning moon standing in for Earth) all in order. Mercury was hiding down near the horizon in the glare of the pre-dawn sky. The sight left me with a powerful sense of awe and wonder. All of those shining heavenly bodies are reflecting light from the Sun. And the distances are difficult to comprehend. The light I was seeing from Saturn left the Sun more than two and a half hours earlier. Even light from our nearest neighbor (the moon) left the sun more than eight minutes earlier. And the fact that I couldn’t see Mercury because of the Sun’s glare more than an hour before sunrise reminds me of how powerful our local star is, even though it is relatively small when compared to other stars in our galaxy. Then I spent some time pondering the cosmic forces at play which makes it possible for all of us to be orbiting the sun, and every eighteen years or so we come into this alignment with our neighbors. This particular alignment has only occurred twice before in my lifetime. As I said, awe and wonder were on the menu for me this morning. In the face of that sort of overwhelming awareness, it would be easy to feel small and insignificant and unimportant. But that sort of thinking would, in my humble opinion, be a mistake. I’ve made that mistake a lot over the course of my life, and it hasn’t served me well. The truth is that we are made of stardust, and the same forces I see at play in the dancing of the planets are at play in me. What might we be capable of if we embraced how amazing we are, rather than how weak and meaningless we sometimes think we are? I’m beginning to wake up, and my intention is to let my light shine. And I will try to remember that even if no one else sees my light right away, I’ll keep shining. Even the Sun’s light takes a long time to reach us when it bounces off Saturn first, but eventually it gets here. So, in this moment, I choose to allow myself to be fed and nourished by the awe and wonder of this Universe in which I find myself. And I choose to remember that I, too, am a part of it all!